The Right To Life Is A Settled Principle Of Law 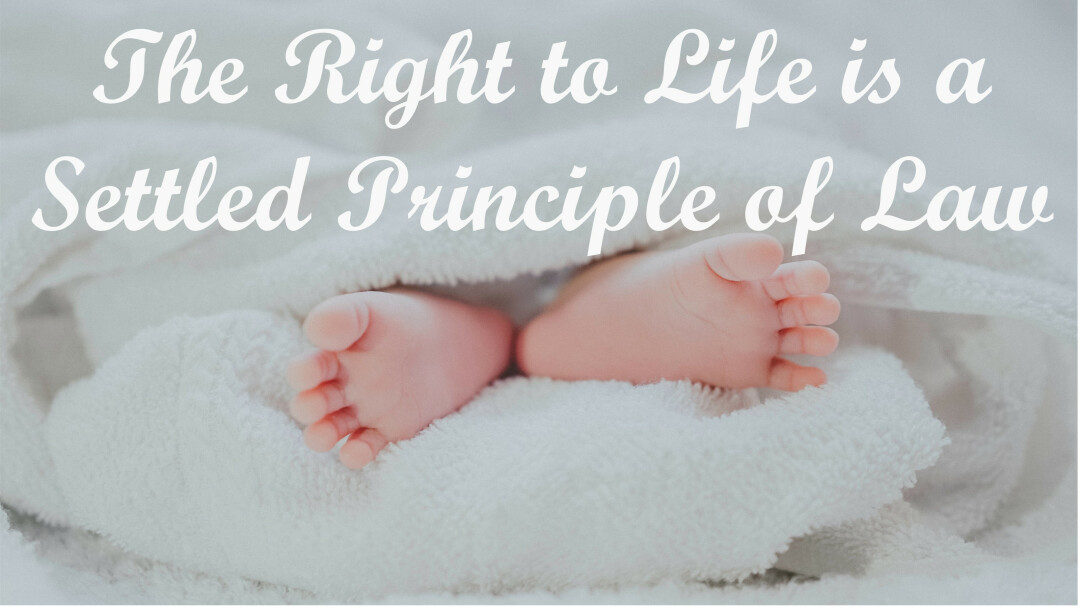 Abortion advocates across the country are raising their voices in rage and actively protesting outside the homes of Supreme Court Justices in response to the leaked draft opinion of the court that may reverse the precedent set in Row v. Wade. As I watch this, I find myself wondering out loud why the issue of the right to life is even a debate in the U.S. I also wonder how it is that protecting the life of the unborn is, as suggested by the far-left comedian/commentator Samantha Bee, a throw-back to the 17th Century.

As a matter of historical fact, the question of the right to life, and that of our government’s responsibility to protect life, was settled more than 200 years ago. The Founders adopted the Judeo-Christian worldview on the question of life. They did so with the plain language of the Declaration of Independence, one of the four organic documents representative of the founding philosophy of the U.S.

In addressing the question of the right to life, the Declaration states:

We hold these truths to be self-evident, that all men are created equal, that they are endowed by their Creator with certain unalienable Rights, that among these are Life, Liberty and the pursuit of Happiness. That to secure these rights, Governments are instituted among Men, deriving their just powers from the consent of the governed

Consider the basic principles expressed in that simple statement:

Governments do not “grant” rights. Rights come from God. God is the source of life. He alone grants people their natural rights. Government’s sole responsibility is to protect those rights, perhaps especially the right to life. Such protection derives from the fact that God-given rights are “inalienable” – that which cannot be encumbered.

The greatest leap in the progress of the human condition came after the recognition that government is not the source of rights, God is. Government is not free to arbitrarily infringe those rights, as was the unbroken history of government for 5,000-plus years up to the point of America’s Declaration.

Yet our Founders were not the first to express these ideals. As I discuss in my book, Salt and Light, the Secret to Restoring America’s Culture, the Founders drew extensively from the teachings of John Locke and William Blackstone to inform their views on life.

Locke was an English theologian and author. His two primary writings, released in 1690, are Two Treatises on Civil Government. In his discussion of the responsibilities and limitations on civil government, he drew heavily from the Bible. He referred to the Bible over 1,300 times in his first treatise and over 157 times in his second. Jefferson borrowed heavily from Locke’s thinking in drafting the Declaration.

As to the right to life, Locke states in his First Treatise on Civil Government that “all men are the workmanship of God Almighty.” He declares that people are God’s property, and that “no one may harm another’s life, health, liberty, or possessions.”

Blackstone was an English judge and law professor. He was perhaps the most prominent English jurist and preeminent legal scholar of the mid-eighteenth century. Between 1765 and 1769, Blackstone published his four-volume series on English law, entitled Commentaries on the Laws of England. The treatise was wildly popular in the colonies. Indeed, despite the fact that the population of England was three times that of the colonies, more copies of the Commentaries were sold in the colonies than in England.

Blackstone’s work was the gold standard of legal reference material during the Founding Era. The series were standard text books for all American law students throughout the nineteenth century. Abraham Lincoln learned the law by reading Blackstone’s Commentaries. Between 1787 and 1890, American judges cited Blackstone as authority for their legal positions more often than any other writer.

Blackstone declares that “Life is the immediate gift of God” and “the right is inherent in every individual.” More particularly, he states that the right to life “begins in contemplation of law as soon as an infant is able to stir in the mother’s womb.” Blackstone goes on to say that “no man has the power to destroy life but through the law of God, who is the author of life.” Blackstone stated that the settled rule of law was that “One who is in the womb is held as already born, whenever a question arises for its benefit.”

Why are such protections extended to the unborn? Blackstone observed that a child “in the mother’s womb is supposed in law to be born for many purposes.” That is, every human life has a God-ordained purpose. It is the not within the preview of man to extinguish such a life before it has a chance to flourish. “On this point,” Blackstone affirmed, the “civil law” is settled. Blackstone’s Commentaries, Book 1, Chapter 1, The Rights of Persons.

As popular as Locke and Blackstone were, neither was the most relied-upon authority for the legal and moral positions of the Founders. The single most quoted authority was the Bible.

Various historians studied approximately 15,000 writings of the Founders, produced during the period from about 1760 through 1805. Researchers looked at letters, books, newspaper articles, pamphlets, etc. The record reveals that the Founders cited the Bible as authority for their positions on civil government more than any other source. Historian David Barton points out that the Bible accounted for “34 percent of the direct quotes in the political writings of the Founding Era.”

What does the Bible tell us about choosing life? Carefully consider the following:

This day I call the heavens and the earth as witnesses against you that I have set before you life and death, blessings and curses. Now choose life, so that you and your children may live and that you may love the LORD your God, listen to his voice, and hold fast to him. Deuteronomy 30:19 – 20.

In 2019, the New York state legislature passed, and then Gov. Mario Cuomo signed, the Reproductive Health Act. It allows for abortion on demand into the third trimester, even up to birth. The law puts the power of life and death over the unborn child squarely in the hands of the mother. The only difference between this and ancient Rome’s infanticide practice is, under Roman law, the father controlled whether the child lived or died.

Gov. Cuomo referred to the law as evidence of “progress.” Actually, it’s quite the opposite. It’s a throwback to the pre-Christian era when cultures openly practiced infanticide. It’s a throwback to a time when human life, especially that of babies and children, had little or no value. True progress was achieved only after Christianized western culture recognized that life was the immediate gift of God. That life was to be protected—especially innocent life, especially helpless life.

That the government of New York gleefully rejected in 2019 the right of a fetus to live, and that the likes of Ms. Bee angrily attack those who would protect life today, are likewise throwbacks to a time when governments wielded absolute and arbitrary power over life and death. This is not progress. It tears at the fabric of our national conscience. It rends asunder the plain language of the Declaration of Independence, which holds that governments are to protect life, not permit the wholesale destruction thereof.