Tent Services Only at 9:15am in July

My Moment with Billy Graham 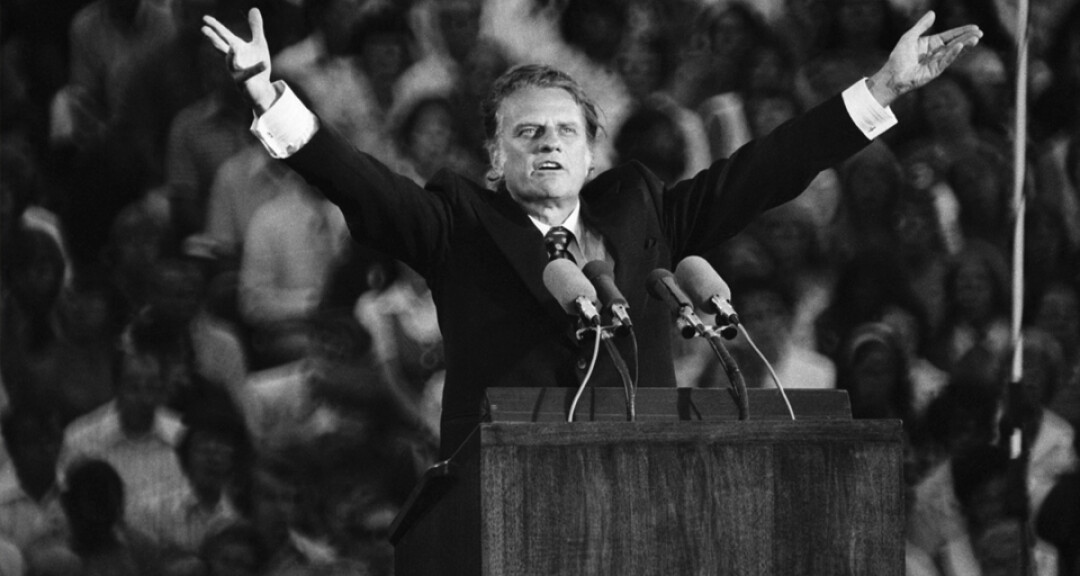 The media is flooding us with the news of the passing of Billy Graham, and I am reminded by the message he preached that he is more alive today than ever before. It was brought to my attention by an interview with his son Franklin Graham. Franklin is one of only a handful of evangelical leaders today who is willing to communicate a clear presentation of the gospel whenever he is interviewed. While Billy Graham provided so many lessons on faithfulness, integrity and morality in a sin-soaked world of political division and moral corruptness, there is one lesson we must never forget.

I was in Washington DC performing at the National Religious Broadcasters convention. Unfortunately, a few days prior to us flying out for the convention, the Space Shuttle Challenger exploded in the sky and shocked our nation. President Ronald Reagan was scheduled to speak to us but had to cancel due the tragedy. Who did they contact to take his place? You guessed it, Dr. Billy Graham.

While I had never heard a sitting President in person, nor met one for that matter, I was still delighted to hear a man whom my entire family admired. Right before he spoke, I still remember sitting close to the stage and knowing he must be in the hallway ready to address the crowd. As an idealistic college student, I was tenacious at going after something I wanted. My desire was to meet Billy Graham. So I left the hall, knowing he must be just outside the door, and saw security outside the men’s room. I quickly went inside, guessing he was in there somewhere. However, I decided to leave him be. Guys don’t talk, or at least they are not supposed to talk, in the men’s room. It is an unwritten guy code.

Obviously, this was not my moment with Billy Graham. I went back into the conference hall to hear him address the crowd. I had never seen him live, and it was a treat for this young college student. After he was finished, I knew I had one more chance to meet him. My goal was to ask him to speak at my graduation. He was president of the college I attended and as far as I knew, had never come back to speak at a commencement. I believed God was calling me to ask him (or at least I was so tenacious I would not give up!).

I quickly exited the event toward the end of that session and as he came down the hall, people surrounded him and cameras flashed. I was a young college kid who would really have no shot at having a moment with this incredible evangelist. However, an opportunity quickly arose and all was not lost. A president from another college (who had a few pounds on me) decided to move through the crowd like an offensive lineman. I immediately followed like a good half-back since I was half his weight. He went right up to Billy Graham. As soon as he finished the brief conversation, he stepped out of the way and there I stood with Dr. Graham. I couldn’t believe it! My moment had arrived. As I began to explain that I was a student from Northwestern College in St. Paul, Minnesota, he smiled and came to life by putting his arm around me.

I am not tall and he is, so you can only imagine what that looked like. It was powerful moment and he was one of the most gracious and godly men I have ever met. I finally had my moment with Billy Graham.

What has been impressed on my mind since he went to be with the Lord was how Billy Graham would always show up at a moment’s notice to share the gospel. He said “yes” whenever and however to preach the Good News of Jesus Christ. It is not very often you are the back-up speaker for the President of the United States. However, it was Billy Graham who became – in a sense – the back-up speaker for Jesus Christ, Peter, the Apostle Paul, Billy Sunday, Dwight Moody and others who have gone to be with Jesus. Dr. Graham said “yes” to every opportunity he had to share Jesus Christ with someone so they could have a moment. Now Billy Graham is with the Lord and the mission lies with us.

That is what I remember about Dr. Billy Graham. With all the character qualities that he had, this stands out more than anything else. – He always took time to share Jesus. – God had called him to preach the Good News of Jesus and it was the passion of his life.

What about you? Have you had a moment with Jesus and put your faith in Him as Savior and Lord? If you have, are you as ready to say “yes” at a moment’s notice to share Jesus with someone else, so they can have a moment with the Savior who can change their life?